You’ll need lots of gold in this game. You’ll pay to upgrade your gear and runes. You’ll be charged for extracting manna from stones. Then you’ll shell out more cash to use that manna to upgrade your ability gems. And the healing potions? Those aren’t free, either. Don’t even get me started on the cost to upgrade the Jeweler and Healer! They get you coming and going…

Gold and How to Get it

So, you’re going to need lots of gold. The usual way for us working stiffs is to work for it. Complete campaign locations and dungeons. Defeated enemies will drop gold and gear. It will all be in a chest when you reach the end so don’t bother picking it up as it falls. Sell every gear item you don’t need at the Grayhaven shop for gold. If you sell something by mistake don’t worry. Just buy it back before you move on to other things.

Update 1.49.5 was a game changer. The Guild of Heroes community asked for the power to sell dust and scrap. The Developers said “yes”. Or perhaps they said “da”. Either way, you can bank massive amounts of gold using the Star Altar. This is especially true if you can convert Legendary (orange) gear and abilities to scrap and dust. I’m talking about many, many millions of gold coins, here. As you increase your Altar capacity you will receive larger amounts of scrap and dust. Do this as often as you can.

If you still want to farm for gold you will collect more if you are using potions of avarice. You can buy them for four diamonds each at the Grayhaven shop. Each one increases the base amount of gold dropped by enemies by 100%. This does not multiply the effect of the greed runes you may have embedded in your gear. You can use up to five potions at once (stacking) to increase the base gold drop by 500%.

After using the first potion, each additional potion will extend the length of the effect by ten minutes. One potion: 30 minutes. Two potions: 40 minutes, and so on.

Farm all the campaign locations and dungeons. You’ll get plenty of gold using this technique from the Farmlands (yes, the Farmlands) right on through Hellfire Mountain.

There is no gold to be had in Guild raids, Arena battles, and forays into the Tower of Trials but your potion of avarice timer will still be running. Save these activities for after your avarice potions expire.

Stuff You can Buy Without Diamonds

If you don’t have diamonds or don’t want to spend them you can buy a chest of random boosters at the shop for manna. The amount of manna charged increases with your experience level but this is a great, and often overlooked, way to get boosters. You just won’t know what you’re getting until you open the chest. 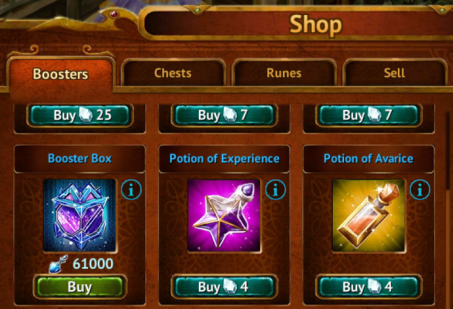 Insert greed runes in your gear to increase the amount of gold you harvest from campaign locations and dungeons. For best results equip the best greed runes you can find and upgrade them relentlessly. This can help but, as I mentioned above, converting gear and abilities to scrap and dust in the Star Arena then selling it is, by far, the best way to fill your coffers with gold.

Another way to earn gold is to compete in the arena. Yes, you will have to enlist a partner and that’s expensive but you will make it all back quickly. Trust me. After you have won a pile of tokens you can exchange them for large sums of gold in the arena shop. This is especially true once you progress to the higher arena leagues.

Diamonds and How to Get Them

There are many ways to fill your pockets with diamonds. You can buy them with real cash. Diamonds can be purchased in this way at any time by tapping the plus sign next to the diamond counter at the top of your screen. If you’ve decided to buy diamonds make sure you check the Event Pedestal in town before you do. There are bargains to be had every couple of weeks and if they are available this is where you’ll find them. If you’d rather sweat it out, read on.

You’ll earn diamonds for completing campaign locations for the first time. You’ll get them once a week collecting daily rewards. You can buy them in the arena shop. We’re talking about ten or fifteen diamonds here, typically. If you want more diamonds you should visit the Guild of Heroes Twitter page or their Facebook page on a fairly regular basis. At least once a month, Guild of Heroes will give you the opportunity to earn diamonds, sometimes fifty at a time, simply by liking or retweeting a post or posting screenshots of your hero in action when they tell you to. In a recent contest, participants earned up to 1000 diamonds by posting images of opened ability chests to Facebook!

Things You Should Do with Diamonds

Increase your storage space Maximize both your personal inventory and your storage chest in town. The more room you have for gear, rune fragments, boosters, and abilities, the better.

Increase the Jeweler’s capacity for extracting manna One slot is not going to be enough. He’ll need all three and you’ll wish he had more. The Blacksmith can have three slots for upgrading gear and you’ll probably want at least two. The Healer making potions and the White Mage upgrading and evolving abilities are the same. They start out with one and eventually you’ll want more.

Open gear and ability chests multiple times This is especially true when if you’re trying for Legendary set pieces in the dungeons. Think about it. You complete campaign locations to get keys to open rooms in the dungeon. There are thirteen or fourteen levels in your typical dungeon, each with six or seven rooms. Once you find the room with the gear chest there is still only a one in six chance that you’ll get the item you want. I don’t know about you, but once I find that chest I’m not about to walk away empty-handed.

Things You Probably Shouldn’t Do

Don’t use diamonds to relieve your impatience If you’ve got more real money than you need in the real world then, by all means, do what you want. If you don’t then use your diamonds carefully. Don’t use them to speed up the any of the upgrading tasks in Grayhaven. If something is going to take six hours to upgrade just do it before you quit the game for the night. Or before you go to work. Or whatever.

Don’t use diamonds to revive yourself in battle OK, I’ve done it. I admit it. If you need to complete a campaign location for your daily quest and you were this close to defeating that boss and you’re totally out of healing potions…like I said, I’ve done it. But really, just play the location again. It only takes a few minutes.

Don’t use diamonds to upgrade your gear I didn’t realize that this was possible for quite a while. If you’re going to do this, drop all of your equipped gear before you do. The cost, in diamonds, to upgrade gear is related to your power score. Lower your power score, pay fewer diamonds. The Developers will probably fix this at some point so take advantage while you can!